Billstedt, in the east of Hamburg. You couldn’t be further away from the many hotspots of nightlife and live music this city is famous for. Billstedt is rather famous for concrete block buildings that house all kinds of social problems – and for the shopping center that has the only Primark of the city. But, as an attempt to improve the quality of the district and the lives of the people that live here, Billstedt has its ‘Kulturpalast’, a cultural center that hosts everything from kids’ music lessons to cabaret performances in a modern building. And finally, rather unexpected in both the district and this center, in the vault of the building you’ll find the ‘Bambi galore’, your totally usual live music club, and the reason why extreme metal devotees from all over the city and its surroundings make their way out to Billstedt at least once every month – in the evening hours, once the Primark shoppers have left.

A Swedish flag was hanging behind the drumkit on stage when I entered the venue. It remained the only backdrop for the whole evening, and set the theme of the night: there was Swedish music on the bill, three Swedish bands who had committed themselves to the oldschool death metal sound.

Of Fire were the first band on stage. “Hello, we’re Of Fire, we’re from Stockholm, and we play death metal. Because that’s what you have to do when you’re from Stockholm. You have no choice.” Um, okay…

Of Fire marched through their set of very straight songs. Never too fast, no unnecessary technical trickeries, not even a little guitar solo, just a simple, solid, doomy death metal sound. And that certainly isn’t a bad thing.

The space in front of the stage was getting very crowded now, because up next was the secret headliner of the night, at least judging from the number of shirts I spotted in the crowd: LIK have apparently made themselves quite a name in the scene with the two albums they have released so far. That is first of all due to the brilliancy of these two records for sure, but it might have helped that many people have probably seen the musicians of LIK with other bands already. Two familiar faces for me on stage: Niklas Sandin who handles the bass in Katatonia (but has upgraded himself to six strings in LIK), and Tomas Åkvik whom I had seen filling in on guitar for Bloodbath. Tomas proved tonight that he is not only an able guitarist but also a great vocalist, with not the slightest weakness in his voice throughout the whole set. 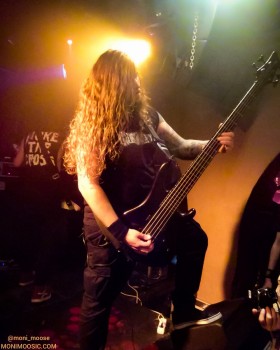 Compared to Of Fire, LIK easily doubled the speed. Especially the songs of the new album Carnage, which made for the better part of the set, are as catchy as any death metal song could ever get, but at the same time all the dirty guitar riffs, melodies, solos and little tempo changes turn the songs into a wild ride, and they never slow down. Remarkably for such a small club, LIK had a sound to kneel down to, it was so perfect and clear as if every instrument was playing a solo at the same time. Bass solo ftw! The guys of LIK might look as if they could hurt no fly, but they delivered a tight, ferocious and infectious show. Murder! Death! Hate! Kill! 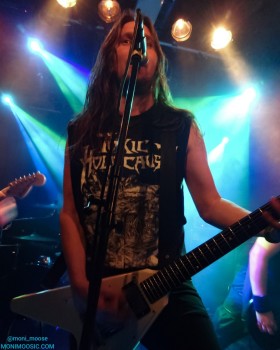 The energy of the band, the songs and the sound were inescapable, thus the people at the front were totally into it, screaming along to many a chorus. Only a few seconds into the first songs I almost fell onto the stage when the first moshpit started behind me. But maybe it wasn’t even a pit.. maybe it was just this one guy who must have had slightly too much beer and was absolutely determined to be the biggest asshole in the room. Like, he deeply desired to be that annoying fuckhead who ruins the show for everybody. Now it’s not like I wouldn’t expect having to deal with some moshing at a death metal gig (whether it’s just one person or more), but this dude definitely crossed the line when he purposely pushed me again and again once he realized how annoying I found him.

He crossed the line even more when he grabbed my arms tightly and didn’t let go, and when he deliberately ripped one of my pins off my jacket. What’s wrong with you, dude?? Unfortunately I have to tell you – you failed. You did not ruin my night, as much as you tried. Because there were LIK on stage in front of me, being all perfect and putting me into so much excitement I would have been willing to deal with pretty much anything. (Thank you though to the guy who finally spoke up and told that idiot off!)

Demonical closed the night, trying to keep up with the speed of LIK. Forward, forward, straight forward! seemed to be the motto of their set, especially when they fired out encore after encore after they had already announced the last song (unexpectedly early). And I guess they were good… however, I wasn’t able to appreciate their set as much as they deserved. First, my mind was still occupied with LIK’s mindblowing performance. Second, I had moved over to the side of the stage, because even though that annoying asshole hadn’t been able to kill my mood during LIK, afterwards my desire for crowd interaction was done and I just wanted to enjoy Demonical from a chilled corner.

Unfortunately, in my new spot the sound wasn’t nearly as good as it had been for LIK. I can absolutely confirm that drummer Kennet Englund laid a true inferno down on his kit, but the rest of the band was a bit of a mess and I didn’t feel any of the energy I had felt from LIK. Most of the crowd seemed to be having fun though, so maybe/probably it was just me.

So even if LIK were my clear highlight of the night, overall it’s save to say that these three bands made for an amazingly well-fitting package. Climbing up the stairs to the exit of the Bambi galore, you leave Sweden and arrive back in Hamburg-Billstedt… but, as was proved once again tonight, Sweden is always worth another trip!