Bloodbath, supergroup of Swedish death metal. Bloodbath, currently consisting of the founding members of Katatonia along with the drummer of Opeth and the singer of Paradise Lost. Not a band you’ll catch live very often. Bloodbath playing a black/death metal festival in Munich, just one day before I was going to be in town for Avatar anyway? Fuck yeah, count me in! Get a day ticket for Bloodbath and then see Avatar the next day (while the festival was still running), that was the plan, and I started to book train tickets and a hostel… Just that those day tickets never went on sale since the regular tickets were selling too well. So look at me buying a weekend ticket just to see Bloodbath… Worth it? Let’s find out!

The Dark Easter Metal Meeting takes place in a complex called Backstage which consists of three indoor venues of different sizes. The festival covers mostly black metal, and I got to admit, I’m not too deep into that. I knew only a few bands on the line up, and most of them played the other day… So I just went for the Backstage Werk straight away, the biggest stage and of course the one where Bloodbath were going to play later, and intended to stay there all day. 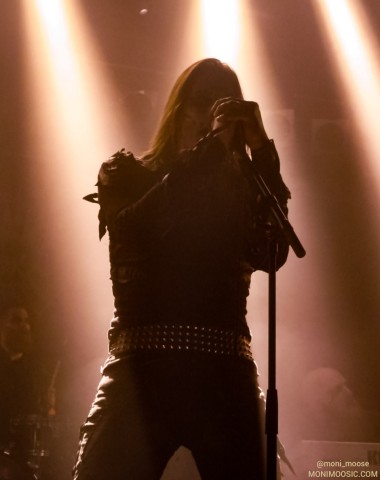 Of the bands I saw over the day, only Dark Fortress made a lasting impression on me. Their powerful melodic black metal is mixed with just the right dash of death metal to make the music jump right into your face. A bit of catchy here, a bit of technical there, sound and corpse paint delivered flawlessly, and there’s nothing left to argue about.

I was also looking forward to Shining, however luck was not on my side today. Personal issues occurred, and I had to leave my spot at the front (not something I do easily, I can assure you!), even had to leave the festival for a while. It looked like I was going to miss Bloodbath and I would have bought the ticket for (almost) nothing… But I made it back, 20 minutes before Bloodbath were going to start, and was even able to slip into the first row again! Happy end before the band had even started, so I was extra excited.

What to say about Bloodbath… They were perfect! I remember the last time I saw them, when the sound was so distorted you could sometimes hardly make out what they were playing. This time, the sound was on point – as distorted as Bloodbath’s morbid oldschool death metal requires, but still crystal clear so you could hear all the details. With a sound like that, the most simple riff – Like Fire, for example – sounds titanic, and the headbanging never stops.

The new guitarist Tomas Åkvik (who has replaced the mysteriously departed Per ‘Sodomizer’ Eriksson since last summer) seems to be a keeper, although the band remains silent on the matter of anyone’s membership status. I don’t mind though, since the sound pretty much spoke for itself.

Performance wise, Bloodbath don’t have to do much. A few headbanging figures on a dimly lit stage, covered in blood and dirt and more blood – it’s enough to send shivers down your spine. In the center of it all, standing almost like a statue, there is Old Nick (Nick Holmes) in his filthy long coat, a rather scary appearance that has very little to do with the gentleman you might know from Paradise Lost.

I know many fans of Bloodbath don’t like Nick’s vocals and plea for Mikael Åkerfeldt to come back. For me however, Nick is the one who brought me to Bloodbath a few years ago, and Grand Morbid Funeral is the album I listen to over and over again. His growls might not be as deep as Mikael’s, but they have that rotten, corpsey touch that makes Bloodbath sound creepier than ever, if you ask me. And as he proved in Munich, he certainly has enough power to kill it on stage.

So if I try to find points to complain about, there’s nothing to find in the band at all, so I gotta talk about the audience… First, I don’t get how some (too many) people can watch a brilliant gig like this just standing there with their arms folded, not moving or making any sounds at all. Second, imho hardly anything is a) as disrespectful towards the band and b) as annoying for anybody else at the gig as calling for one specific song over and over again. Especially since it’s not as if they wouldn’t play Eaten anyway in the end!!! (Third, I don’t like it when Axe throws a drumstick right at me twice, but both times it gets snatched away from me… screw all those tall guys around me… can’t blame them though. 😉 )

Bloodbath seem to have a busy year ahead of them, especially now that Katatonia are officially put on a hiatus. A new album is in the works, they’re on several festival bills over the summer and even have a real tour in the US scheduled for May. Certainly can’t hurt to try to catch them again at some point!