What better way to start the concert year than a Greek symphonic death metal band on a rainy Thursday night in January?

When I bought my ticket for Septicflesh, I was surprised that they were booked into the Markthalle, a venue where usually more well known (metal) bands play, but on entering the building, it turned out that the concert was going to take place in the small room of the venue, the Marx, one of the tiniest stages in the city (for international touring bands at least).

While only a handful of people gathered in the club and everybody kept talking about how they would love to be at the Batushka gig that was taking place in a different venue on the same night, the evening was opened by Egyptian band Odious, who played instrumental only – didn’t strike me as odd, until they apologized after two or three songs that their singer couldn’t perform with them tonight due to sickness. Definitely speaks for the band when the instrumentals are so good that you don’t even notice something’s missing!

Now that the room had slowly filled up, Inquisition were up next and demonstrated what black metal is about. Quite impressive how much noise they created with only two people on stage!

And then there were Septicflesh, who proved that you don’t need a big stage to deliver a great show. They looked almost intimidating in their dark cyber armour (for the lack of a better way to describe their outfits), and the sound was massive! Although it was mostly dominated by the drums, the orchestral backing tracks and Seth’s vocals and not so much by the guitars, they sounded extremely heavy and powerful, a wall of dark and darker epicness. Almost half of the setlist consisted of songs from the latest album Codex Omega, the rest came from the previous three albums Titan, The Great Mass and Communion.

Performance-wise, the little stage didn’t leave any space for anything else but proper headbanging, but that’s what the musicians did par excellence until they all were drenched in sweat. The spectacle was of course led by singer / bassist Spiros “Seth” Antoniou and his monstrous deep growls, along with his mighty appearance and the way he addressed and conducted the crowd. “Feel the orchestra”, he asked us more than once… Just speaking for myself here, but I certainly felt it! 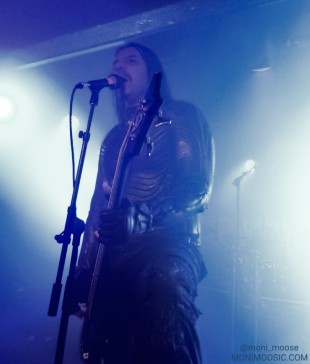