Epica are another one of those bands that I just can’t get enough of. Earlier this year I celebrated my 20th Epica show, but as if that would stop me from going to see them again… three days in the Netherlands, easy to reach by car and short distances between the cities given the small size of the country – why not?

Well… the only reason ‘why not’ is that I’ve made some rather unpleasant experiences with crowds in the Netherlands in the past. The country is home of an amazing metal scene with many excellent bands and just as many enthusiastic fans, but this enthusiasm will make people push into the front of the queue no matter how late they arrived, they’ll knock you over the head when a setlist is handed from stage, and so on. Still, the prospect of those three shows was so tempting (and even more tempting due to the announcement of MaYaN as support act, because I had wanted to see them for ages already but it never worked out…) that I decided to give the Dutchies another chance. 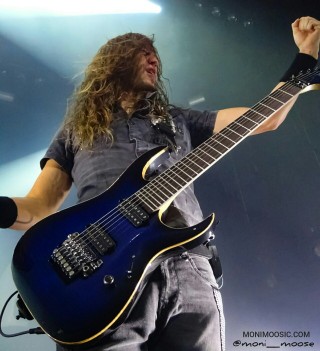 I did not regret it! They might still not know how to form a queue, which is quite annoying if you’re used to going to concerts in the UK (where people simply love queuing) and Germany (where people hate queuing but everybody’s inner asshole is supressed by the urge to obey rules), but that’s a problem you can avoid by coming out to the venue so early that you are first in line (no, not in line, as there is no line… that you are the one in the crowd who stands closest to the door). Apart from that, everyone I met this weekend was really chilled and lovely. Not just the fellow Germans that came over, but also the many Dutchies that I had or had not met at previous occasions and even some people from the UK. You come to the venue and after a few minutes you are engaged into avid discussions about different bands and the kind of stuff you’ll only hear amongst true concert junkies (“At the Nightwish gig in Frankfurt in 2015…” – “OH! I was there too!!” …… “THAT WEMBLEY SHOW THOUGH!!!”). After spending a few hours together outside the venue, you feel like friends and watch out for each other so that all those who came out early eventually make it to the front.

Nothing to complain about the venues as well (except that the entrances aren’t covered by a roof which would be very welcome when you’re waiting all day while it keeps raining). The Hedon, the Patronaat and the Doornroosje are around the upper limit of what counts as ‘club shows’, with capacities more or less around 1000 people. Quite surprisingly at that size, they were all played without a barrier in front of the stage, so we were super close to the bands (almost too close for comfort), and fortunately they still managed to create a very good sound even at the front, which is something you shouldn’t take for granted.

But now about the most important thing: the bands!
(I won’t go into detail about the opening acts who changed every night, but My Propane were amazing!)

Founded by Epica’s guitarist Mark Jansen, MaYaN are almost a sort of ‘all star band’ of Dutch (symphonic) metal, with members of (amongst others) Epica and Delain and the late Stream of Passion and After Forever on stage.

But MaYaN are not at all about big names, they are about amazingly talented musicians performing fantastic symphonic death metal songs, as they proved at these three shows. Most notably, Mark Jansen doesn’t even have

to be on stage himself (he only came out for two songs every night), because in order to enable the band to perform live regularly despite Mark’s busy schedule with Epica, they’ve come up with a slightly unusual solution – a solution called George Oosthoek who replaces Mark at most MaYaN shows nowadays. On other occasions, other members have been replaced too, so don’t go out to a MaYaN show just to see a certain musician… But the point is – it works, no matter who is standing on stage, simply because the music is so good and each of them is (did I already say it?) amazingly talented. 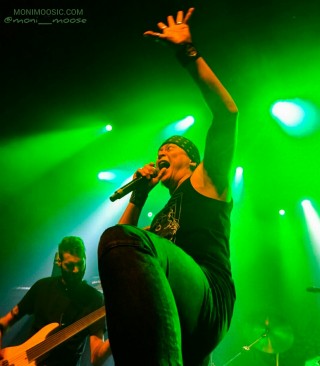 The vocalists were absolutely the stars of the MaYaN shows. Besides that adorable grunting powerhouse George, who could not stand still for a second on stage, there was the mindblowing clean voice of Henning Basse who sounded great despite apparently not even being in full possession of his abilities, at least on the first night in Zwolle. And then there were the beautiful ladies, Marcela Bovio and Laura Macrí; the duet of these two amazing soprano voices on the ballad Insano was one of the many highlights every night.

With the continuous interchange between these four incredible singers, the MaYaN sets were highly diverting and a real treat for vocal geeks (like me). This way, it didn’t even hurt that the instrumentals might not have been as tight as those of a band that plays together permanently.

And even that is complaining on a high level. Noteworthy though, the only musician who really managed to stand out was drummer Ariën van Weesenbeek who did not only play two full sets every night (support set with MaYaN and main set with Epica) but played even faster and trickier stuff with MaYaN than with his main band.

Speaking of that main band… 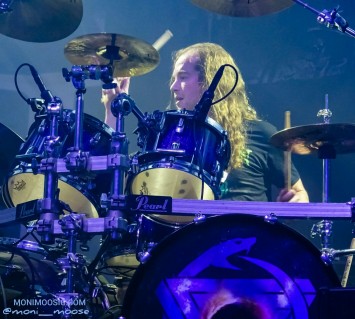 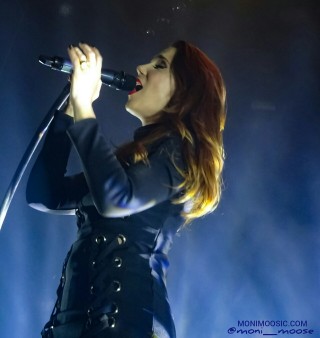 If you have seen Epica on their co-headliner tour with Powerwolf earlier this year, you will surely remember their gorgeous visual stage production, with beautiful lighting, pyros, holographic pyramids, lasers… This time, due to the much smaller size of the stages, all that was left were some nice lights and a little bit of pyro here and there, but all in all much more stripped down than in the big venues. I didn’t mind though, because this way it was all about the band and the music.

And hell – a band like Epica doesn’t need a lot of production gimmicks to put on a good show, because it’s just so fun to watch the band members on stage.

I swear there is no other band on this planet enjoying themselves as much on stage as Epica! No. other. Grinning from ear to ear, massively headbanging throughout the whole show, jumping around and especially interacting a lot with each other – it all seems very real and truly makes you believe that these people are a bunch of close friends who are having the time of their lives on stage every night. It’s the bigger things, like Coen Janssen skating across the stage like a maniac with his keyboard-on-wheels, or the little things, like Isaac Delahaye singing along at the top of his lungs and shouting “woohooo!” into Mark Jansen’s face when Mark came over to Isaac’s side of the stage. The benefit of not having a barrier, because you wouldn’t even hear stuff like that if you weren’t that close to the stage. Also, the benefit of going to multiple shows, because people who see Epica for the first time will mostly be captivated by Simone Simons’ stunning presence and not even notice how much is actually going on around her. But once you manage to take your eyes off her, you don’t know where to look first, because there’s always something going on in every corner of the stage. Someone fooling around here, someone posing there, someone teasing their band mates, someone smiling straight at you…

And if all that joy and happiness on stage wasn’t enough already to make you feel equally happy and euphoric, there is still the music. That is, if you don’t like Epica’s music it’s up to you (some people think it’s “too bombastic” or “too epic”; to me there is no such thing…), but they are without a doubt not only the heaviest, but also one of the most complex and ingenious bands in the symphonic metal genre. They find just the right balance between complexity and progressiveness on the one side and catchiness and big melodies on the other side (but without ever getting too cheesy), and they perfectly mix heavy riffs and Mark’s grunts with string arrangements, big choirs and Simone’s beautiful voice. Add a few fantastic guitar solos (I never get tired of saying that Isaac is the only guitarist who can make me kneel for a fucking solo!), and it can’t get any better. Needless to say, all the guys in the band are excellent musicians and Simone hit every note with ease these days, so despite all the headbanging and fooling around on stage, these shows were absolutely flawless.

Still not special enough for you? Well, ‘special’ moments happened as well, like Isaac making the whole audience chant the name of his predecessor in the band, Ad Sluijter, who came out to watch the show in Haarlem, or Simone being joined by Laura Macrí and Marcela Bovio for vocals on Sancta Terra in Nijmegen – what an enchanting trio!

In the end, if you’d want me to find anything to criticize about these outstanding live performances, I’d have to refer to the setlist. The main focus was on the latest album The Holographic Principle, which makes sense and was fine for me because I love that album. Also, one song from the new EP The Solace System found it’s way into the set every night (either Wheel Of Destiny or Fight Your Demons), and a few songs from 2014’s The Quantum Enigma. The rest of the set was filled with classics from the first three albums, keeping the good old tradition of closing the gig with the magnificent Consign To Oblivion (by God or by Satan or by anybody else, I hope they never change that!).

And here come’s the complain: I get that no song from Requiem For The Indifferent was played (even though I like that album, the only song from it that was played on recent tours was Storm The Sorrow, which is, in my opinion, one of the weakest tracks, so no big loss here), but skipping all of Design Your Universe as well? Like, really? That album is a huge fan favourite with so much great material…. and speaking of fan favourites: Sorry, very controversial opinion incoming, but I think playing Cry For The Moon every night is a waste of time because the song is just too long considering it’s the same parts that get repeated over and over again. Just my two cents here. Apart from that, nothing but endless love for this wonderful band, and it feels very good to know I’ll be seeing them a few more times next month already! Have you got your tickets? No? Better hurry up then, The Ultimate Principle is coming!