Ghulehs on tour – a roadtrip through Sweden

When one of my favourite bands announces a concert in whatever country, I never say “I can’t go” or “it’s too far away” immediately. First, I check if there’s a way to make it happen. So when Ghost were announced for two shows in amusement parks in Stockholm and Gothenburg, I checked several travel options and came to the conclusion that a trip by car would be an easy and affordable option, sharing fuel costs with friends. “Hey girls, would you be interested in a roadtrip through Sweden to see Ghost?” – “HELL YES!!!!!”

As my own car would have been much too small for four girls plus luggage, I picked up a rental car, a huge black beauty that would serve as our tour bus for the week and whom we affectionately named “Omega” (after another huge black beauty, you know…). Then I went to the train station to meet my three lovely friends. We spent the rest of the day celebrating Verena’s birthday and carefully preparing our trip…. at the supermarket, spending more than 100€ on snacks and drinks (not even alcohol)! I don’t dare to imagine what the same stuff would have cost us in Sweden… 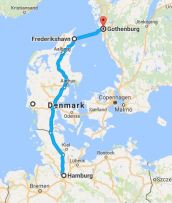 You certainly don’t want to miss your ferry! So we got into the car (sorry, the tour bus) waaay early and saw with relief that the expected arrival time on the navigation system was 100 mins before the deadline for check-in at the ferry… no need to worry then?? 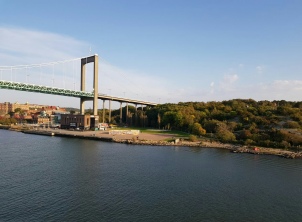 2 km into the trip, one of the girls started to feel nauseous, and we had to stop and wait for her to get better (she blames our vegan food, but that can CERTAINLY not be true! 😉 ). Through traffic jams and closed roads, we tried to keep our spirits up by partying with good music in the car (can you listen to Ghost’s whole discography in one go? Yes you can!), but before we had even reached the Danish border, 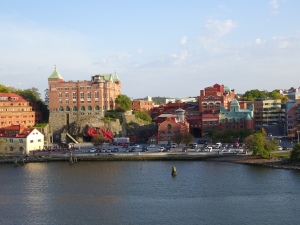 our time buffer was down to 10 mins. As the driver, I started to feel nervous… no Verena, you can’t have a cigarette now!! No Laura, no peeing! Luckily, traffic in Danmark is pretty much nonexistent compared to traffic in Germany, so all went well and finally we found 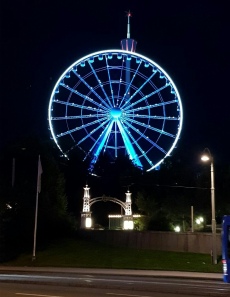 ourselves on deck of the ferry that brought us from the north of Danmark to the capital of melodic death metal: Gothenburg. The city greeted us with a breathtaking view from the ship on arrival, and later with the sparkling ferris wheel of Liseberg amusement park, getting us all hyped for the concert that would take place there on Saturday. But first, there were other missions on our travel schedule…

Off we went to cross Sweden from the east to the west. A landscape of magnificent beauty awaited us, especially as we drove along the giant Vättern lake. We couldn’t stop staring…. well, the others couldn’t. I had to keep my eyes on the street. 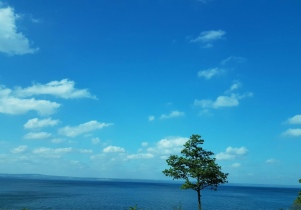 One of several reasons why we had chosen this route was that it allowed us a stop in Linköping, the home town of Ghost. Hard to believe that the creative mind of Ghost grew up in this sleepy, peaceful and rather boring little town… or maybe this is exactly how the mind of a genius has to be formed?

Not much to do in Linköping… but if you happen to be four people and a certain house happens to be just around the corner, you could take the opportunity and copy one of the most famous pictures of a certain band called Magna Carta Cartel – a name that should ring a bell with most Ghost fans. Surprisingly enough, it didn’t take us too long to get the shot done!

Arriving at our hostel in Stockholm we were pretty dead… but how are you supposed to sleep when there’s a guy in your dorm who keeps snoring all night?? I hardly closed my eyes that night… female travellers of this world, whenever you have the chance to do so, do yourself a favour and book a female dorm! I learned that lesson long ago and can’t exactly remember why I neglected it this time… but it was a mistake I probably won’t repeat anytime soon.

To be able to get into the queue in Gothenburg as early as possible, we left Stockholm right after the show and got onto dark and lonely Swedish roads (at least much darker and lonelier than German roads by night). Don’t try to find a toilet in Sweden by night… they’re all closed. Here’s a special thanks to Laura who kept me awake and in good mood all night by providing me with food and drinks, listening to my nerdy talks about music and telling me nice things about sparkling dicks in return…

How do you end a trip like this? Especially after THAT ending of the Gothenburg ritual? The answer is – I simply don’t know. Still in a state of shock, we just got back onto the ferry and drove home. Removed endless amounts of trash from the car, dropped the girls at the station, and that was it.

All I can say is that these were some of the best and most fun days ever. I can’t thank my ghulehs Verena, Laura and Verena enough for being awesome companions on the road, as well as all the other lovely people we met at the rituals. And of course I can’t thank Ghost enough for bringing us together, for bringing us to beautiful Sweden and of course for those amazing shows! Let’s do it all again very soon, shall we?

One thought on “Ghulehs on tour – a roadtrip through Sweden”